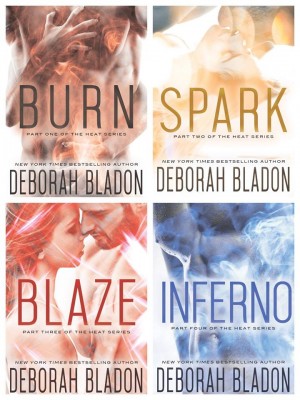 TORN will be released within the next few days. I wish I had a definitive date, but each day I speak with my attorney about the copyright infringement issue and he gives me updates, most of which include very positive information. He’s made tremendous progress on this and has worked hard. It’s been a challenging thing mainly because the website that is selling the copy of TORN that I shared with an ARC reader isn’t located in North America so their laws differ from ours. He has assured me that I’ll be able to release the book very shortly so we’re ready to go as soon as I get the go ahead from him.

I’m all for looking to the future so here’s what is coming next! I haven’t released a series in a few months and it’s time to bring the cliffhangers back.

HEAT is a 4 part novella series that features celebrity chef Tyler Monroe. (Tyler is the older brother of Kayla from the RUIN series.)

Instead of just HEAT – Part 1, Part 2, etc, I wanted to give each part a name that captures the progression of Tyler’s relationship with his love interest, Cadence.

BURN, the first part of the HEAT series will release very shortly after TORN releases. Since these are novellas they will be priced at 99 cents each. The entire HEAT series will be available as a bundle a day or two after INFERNO (the 4th and final part of the series) releases, for those readers who prefer to read the story once it’s complete.

Thank you to Wolf & Eagle Media for once again making me the most amazing covers.