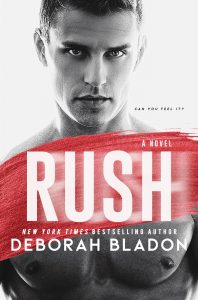 Here’s the gorgeous cover for RUSH. This is a sexy standalone featuring two new characters.

RUSH will be a surprise release and it will be available on Amazon, iBooks, Barnes & Noble and Kobo. Keep watching this page for links to the retailers as soon as the book is available.

Here’s the blurb for RUSH!

I met Case Abbott when I was stepping out of the shower.
I had a towel wrapped around me.
He had his phone in his hand ready to call the police.
I thought sneaking into my older brother’s Manhattan apartment to surprise him was a great idea.
Except, I was the one who was surprised. Not only was my brother out of town, but he didn’t own the apartment.
His best friend, Case, did and he had plans for the night that didn’t include me.
After I packed up my things so I could check into a hotel, Case had a change of heart.
He told me I could stay in his guest room until my brother came back.
A week turned into two and then three.
I should have been hurrying back to my life in Seattle.
Case was needed in California, where he lived most of the time.
But our attraction was undeniable.
The rush I felt when I was with him was addictive.
We both knew that if we crossed the line, there was a chance that someone would get hurt.
Neither of us could have predicted who that would be.

Thank you to Wolf & Eagle Media for another perfect cover.

I can’t wait for you to meet Case and the woman who owns his heart. xo